As a kid, saying “I can’t” typically meant that you either didn’t know how to do something, or you [literally] could not do something – because you were too short, not allowed, etc… 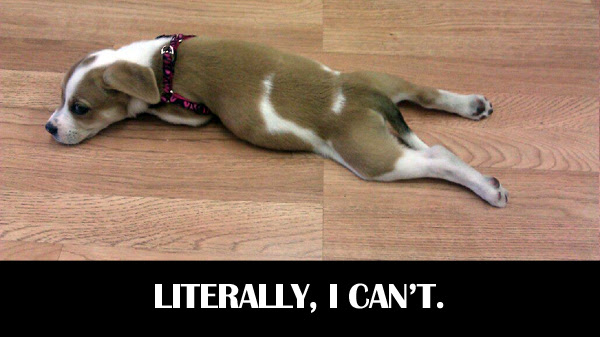 Pictured Above – #OliveMartin, exhausted after a full afternoon of play time (too pooped to poop).

As an Adult However,

…the boundaries and reasons that used to legitimately keep us from doing something typically aren’t there anymore, leading me to the subject of this email –  When you say “you can’t”, it typically means – “you won’t.”

Think about an instance recently when a co-worked, friend or even you had said “I can’t” do something.  Now replace the same sentence with “I won’t”… All of the sudden the real meaning of the sentence is revealed in all of it’s adversarial glory!

I often catch myself about to say “I can’t” and have now gotten to the point where I replay the same sentence in my head with “I won’t” before I even open my mouth.  In most cases, I will say the sentence with the most honest [I won’t] verbiage, or choose to rephrase my sentence – being more intentional as to why I would rather not proceed with what is being discussed.

“Can’t” is a Bogus State of Mind

The word “can’t” often accompanies sentences used to dilute one’s self into feeling better about why they aren’t where they would really like to be in their life.  Take the following example:

What are you doing to get in front of the right people?  I seriously doubt you have tried EVERYTHING possible to merit the use of the word “can’t”.  Who’s really stunting your success (besides yourself)?  Now, consider the same sentence with the alternate verbiage:

Things are getting mighty honest around here all of the sudden aren’t they?

It is my hope that this week’s message uncovers the “won’ts” in your life and/or business and enables you to pivot and change your (and your team’s) thought process toward more productive day to day engagements with both clients and co-workers.  Thank you for reading and have a great weekend!

What articles would you like to see next?  Feel free to leave feedback in the comments section below.  I look forward to hearing from you and hope you have an awesome weekend!