What If, What Next, Why Not!? · Fist Pump Friday
Skip to content 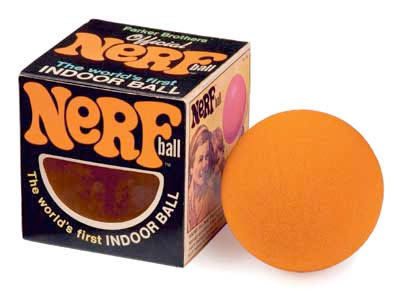 NERF – a name that has become synonymous with kid fun, both indoors as much as outdoors, got its start in a not so conventional way.  The founder/inventor, Reyn Guyer actually happened upon this new toy while testing out another toy set (a caveman game), which had a bunch of foam rubber rocks as part of it.

After finding much more enjoyment with throwing around the foam rocks rather than playing with the caveman itself, Guyer asked himself “What if the rocks were the toy?”  [there was nothing like it on the market at the time]

He was on to something… He then asked “What next could we do with this new foam rubber material to make other toys?” [baseballs, footballs, ping pong balls, darts, etc…]

The only other question to ask was “Why not!?” [This would be the end to moms yelling not to play ball in the house]

After selling the idea to Hasbro Toys, Nerf (which stands for Non-Expanding Recreational Foam) accounts for over 1.5 BILLION dollars worth of business yearly to the company!

Last week, we explored the Guinness Book of World Records and how every business should push themselves to be better than they were yesterday.  How can you employ the “what if, what next, why not?!” mentality to evolve your current products or services into a whole new stratosphere?

What if… What Next… Why Not!

Thank you for reading this and enjoy your weekend!